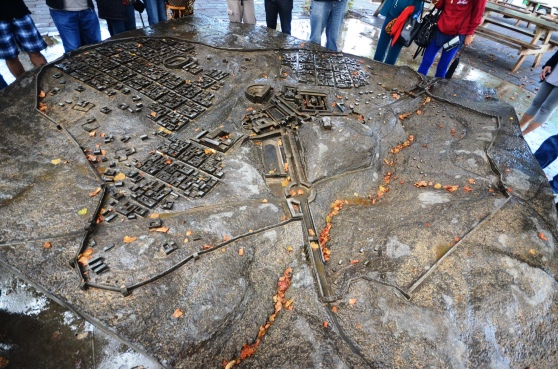 A map of Scythopolis made from bronze.

Well, today was another historical tour. We stopped at an old city named Beit She’an. It was amazing to see so much of an extremely old city still in great shape. This was truly a treat. Ancient Beit She’an is one of the most impressive Roman and Byzantine sites in Israel.

The acoustics of this structure are perfect! This was located almost at the center of the city, it was a huge gathering hall like an auditorium. You have to note that this portion of the excavation is only the main city area, much of the outskirts of the city are still buried underground. So much to be discovered and unraveled in this wonderful land, furthermore, you will find it interesting to know that even simple walks in this area can bring you to unravel timeless treasures just sitting in the surface of the soil. One of the guys from our team was able to find tiny piece of broken pottery and an old coin (From the Byzantine Period, or so they said). Of course, you don’t want to be caught digging and making your own personal excavation – so be discrete and keep smiling!

View of the city from a hilltop.

There was a high point overlooking the entire ancient city, here is a shot I took from the top. Simply amazing! The breeze on that hill was perfect especially with light drizzle. Too bad we got caught in the rain on our way down! Next, we headed over in the direction of the Dead Sea and stopped by the Qumran Community, the area where the Dead Sea scrolls where found.

What is left of an Essenes home.

The Essenes were a small community of people that separated themselves from society and devoted their lives to the Word, everything they did centered on the Hebrew Bible and its preservation. This is a picture of a typical home for this community. Around this region was found untouched copies of the Hebrew Bible which was known as the Dead Sea scrolls.

Ruins of an Essenes community.

Here are more photos of the ruins in this region. As you hear the stories of the Essenes narrated to you by the tour guide, you realize that all the events that happened was nothing short of providence! It was the unseen hand of God doing all this so that today I can open the Holy Scriptures and read it freely and completely.

Location where the Dead Sea Scrolls were found.

The scrolls were discovered in the caves of the mountainous terrain behind me. As you listen to the tour guide you cannot help but thank God how the Word was preserved from generation to generation despite the many attempts to totally annihilate the Jews and destroy the written Word of God. Truly God watches over his people, His treasured possession. When you hear the stories, it won’t be long until you realize how ungrateful and lazy we are at times when we don’t even take a moment to read and meditate on the very Word that so many people before us gave their entire lives to. My prayer is that the Lord restores reverence for His Word among His people, not just a Sunday morning reverence but a daily deep reverence, awareness and passion for the Scriptures that empowers us to live and obey His Word day after day. That is why Paul said,

Let the word of Christ dwell in you richly, teaching and admonishing one another in all wisdom, singing psalms and hymns and spiritual songs, with thankfulness in your hearts to God. (Colossians 3:16, ESV)

From the Qumran community, we drove to the Dead Sea to take a dip. Simply put, the Dead Sea is the lowest place on Earth and the saltiest body of water on Earth! 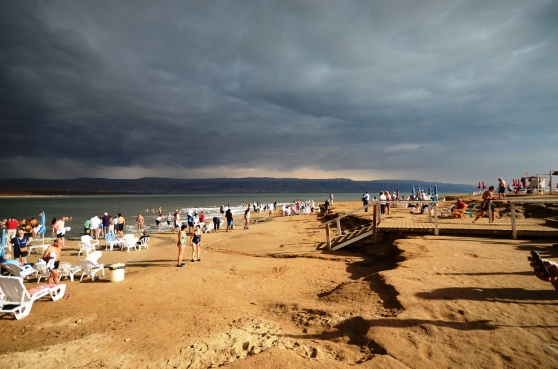 A tourist beach by the Dead Sea.

We actually took a dip to just try it out! This body of Water has been a goldmine for cosmetic products, so imagine going to the very source of so many of these products sold globally. But first, before going for a dip you must read the rules. It’s not your typical beach with wonderful warm water, the water is full of minerals and a very high content of salt! Some rules are:

Just about to take a dip.

If you have sensitive skin, however, prepare to get all itchy and red! Here is the cool part of the experience though, because the water is so salty and packed with minerals you float easily. I mean it felt weird because usually on water you can plant your feet without effort on the ground but in this case you feel the water actually pushing you to float and you can lose your balance easily if you’re not careful. You can raise both feet and float on your butt without effort at all, you don’t even need to paddle to float! It was a great experience. 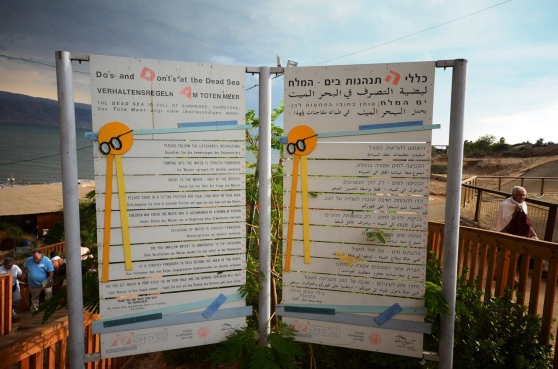 The rules of the Dead Sea.

After the Dead Sea experience, we started our ascent to Jerusalem and checked in a hotel in the City of the Most High (that sounds just about right!). Tomorrow and the next couple of days will be all Jerusalem-Jesus sites! I’ll definitely be posting a lot, so make sure to catch the upcoming posts! Shalom-shalom!

One thought on “My Holy Land Experience, Part 5.”